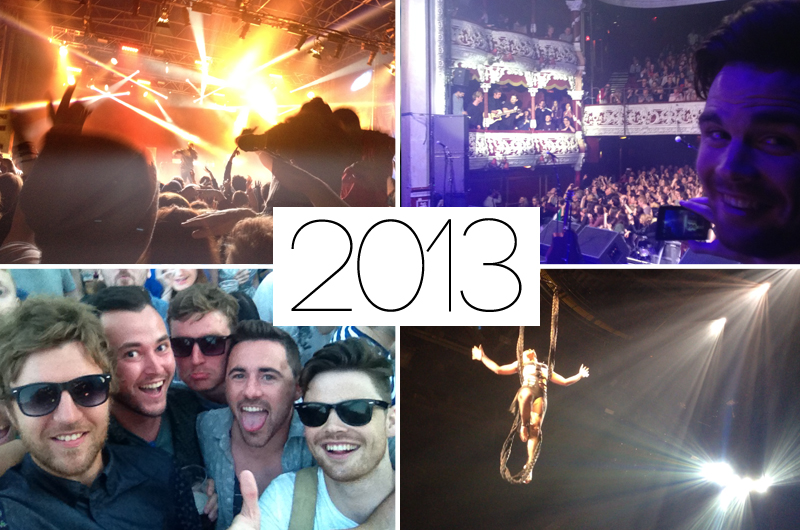 The start of 2013 began with a bit of reflection for me, not in any sort of spiritual or sentimental way. No, thankfully none of the that lollygagging. It was more looking back on the mixed bag that was 2012. 2012 for all intents and purposes was saved by the quality of music that I witnessed. For many years, going to gigs has been high up on the agenda but 2012 brought with it unrivalled spare time, extra cash, no college, no time sapping full-time job (for a part) and willingness to experience more music. This resulted in me attending 160 gigs that year (see list here).

It was also the first year that I decided to log what gigs I was going to, for no other reason that to keep track and try and remember the great stuff as time went on (that's soppy shite isn't it?). So as much as I was impressed with 160 gigs in one calendar year, this number only screamed one thing to me: 'Is 200 possible?'. I was about to find out.

Following up from the busy 2012, a very varied beginning to 2013 saw me take in the new (Le Galaxie), the old (Arlo Guthrie) and the big scale venue gig (TDCC) -  a grand auld start to be fair.

Gigs here and afar (Brighton) brought me up to the Easter break which saw the first of our GoldenPlec's Coast to Coast; Tea & Toast charity event for Down Syndrome Ireland. Myself and the bossman, Aidan Cuffe, had spent the previous 4-5 months organising this huge cross-country charity event. In order to drum up some promo for the event, we took the lads from Kodaline back to the school that Ste and Mark attended (my school too). We shot a nostalgic video with the guys and also recorded a number of songs in front of their old lockers too (see videos here [High Hopes] and here [All I Want]). Some of the old teachers came along too which was gas craic altogether, seeing one or two of our old teachers 'star struck' (not quite) at the lads who I remember used to get all kinds of stick from the teachers in question. A nice old night back in Swords, washed down with a pint of the black stuff in the local after too for good measure.

The Coast to Coast event saw us cross the country, stopping in multiple towns along the way to meet a band, record said band (on our sponsor provided Nokia cameras), have a cup of tea (with our sponsors Barry's Tea) and some toast (with our sponsors Johnston, Mooney & O'Brien bread)) and then head on; spending no more than 35 minutes at each stop. Sounds easy right? Day 1: 8 stops, 8 acts, 8 videos, 5 counties, 7 cups of tea, 4 slices of toast (me alone), 16 or so hours on the go. Day 2: 9 stops, 11 acts, 11 videos, 4 cups of tea, 2 slices of toast, 1 stolen car keys, 1 organised Whelans gig, 19 or so hours on the go. Thankfully, we raised over €5,000 for our charity Down Syndrome Ireland, creating some great videos, raising awareness for the charity, organising our first big ass gig in Whelans and for GP and having a great laugh along the way.

Next up was the beggining of the festival season which always kicks off nice and super early with Vantastival (my review: Friday, Saturday & Sunday), located on my old stomping ground of Dundalk. This was my second year back at Vantastival which by far and away was the best festival I attended in 2012. That perfect festival experience had a lot to do with the relaxed nature of the organisers, the mates who plodded along and the fantastic Irish music on offer that year. This year also had many things to rant and rave about, notably the improvements of stage set-ups and organisation of the festival. While I saw 16 bands over the 3 days, I was still a bit disappointed that I didn't get to see more. Most notably was my unknown absence for the set of Rachel Sermanni who is truly wonderful. The Barley Mob once again triumphed on the same stage that introduced me to them a year previously and Damien Dempsey, the only man I will ever fan-girl over topped it all off very nicely.

HAIM in Whelans was the next stand out gig, and one that I nearly didn't make it to because I had missed out on tickets. The fact that such a noteworthy band that had already won the 'BBC Sound of 2013' award were playing the sweatbox that was Whelans was one not to be missed. Looking back, it turned out to be a powerhouse of a gig that will live long in the memory as the three siblings thundered, sweated, bashed and bass-faced throughout this thunderstorm of a set. Definitely up there! It also capped off a day that saw me take in The Barley Mob, Fox E & the Good Hands, Raglans, HAIM and Todd Terje all in one day - grand day.

Visiting KT Tunstall in The Pepper Canister Church kept up tradition with my mateso Haleigh, even if we nearly did break our backs leaning over the balcony like lunatics from above. Body & Soul festival was the start of the mammoth festival journey that was to take place over the next month or so. While I didn't see any many bands as the years previously, the craic was had with Charles Bradley and Solange being highlights before I had to head home early on the Sunday due to work the next day. Longitude was the most welcome of the festivals this year. MCD breaking away from Oxegen with more alternative acts was a masterstroke and Dublin also needed a huge city-based festival that caters more for the masses (not Forbidden Fruit basically). It also helped that Dublin was in the middle of an amazing heatwave that was to see many a burned face floating about - myself included. Matt Corby amazed me and the tiny crowd that greeted him surprisingly, the Phantom Green area was the perfect place to relax and dance but it was Jessie Ware that stole the show. Jessie Ware is probably the number one gig going regret of 2012 as I didn't attend her gig in The Sugar Club - I have no clue why I didn't go - especially as her album was my favourite in 2012. All that, and that was only day 1 of Longitude. Across the weekend, seeing the Kodaline mateso's on the big stage in front of 10,000 people was an eye-opener to what was to come, Local Natives, Vampire Weekend, London Grammar, Claire Beck and Kelly-Anne Byrne DJ set and Kraftwerk - grand grand grand.

Next came the best weekend of 2013 - Knockanstockan. I must admit that we had a small involvement in the festival as myself and bossman Aidan Cuffe were signed up to curate our own small stage at the festival. We were approached by Bettine and GStar from the Knockanstockan crew to currate a stage, shoot some videos and drum up a bit of publicity for the festival - essentially, we were making partners for the festival and site. After a few months of gas meetings, a lot of band emails we were all ready to go. We rocked down on the Friday night late after work all ready, caught a few bands that night and had a few cans. That night we decided to head on up to the Jimmy Lee Juke Joint that was going to be our stage for the two days, just to introduce ourselves before taking over the next day; we'd only been contacting via email with them before this. We arrived up and were greeted warmly by the staff of the Juke Joint and by a raft of 'Do Not Enter' signs. Apparently, the floor had caved in under immense pressure from all the boogieing that night. This meant that the site builder/constructer had to swing by in the morning to fix and sign off on it's safety. So off we rambled into the KS forrest for a few more beer with a shed load of our mates. We woke dazedly, but early, and went down to see what stood our stage. Unfortunately, nothing much had changed and they were still waiting on Bob the Builder to swing by.